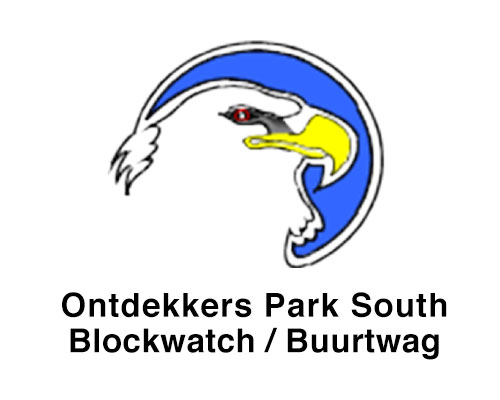 Ontdekkers Park South Blockwatch (OPSB) is a community based organisation that was founded in 1989 in an effort to fight crime in Roodepoort, Johannesburg. OPSB prides itself in creating a safe neighbourhood for its residents who volunteer their time and money. The volunteer OPSB resident patrols have proved successful and have been operational for more than twenty years making it the oldest Blockwatch in the Roodepoort area.

As part of the Blockwatch safety procedures, the volunteers are taught to combat crime in various ways. Some of which include:

To aid the professionalism and guidelines of the OPSB community, the Blockwatch works under the auspices of the CPF (Community Police Forum) and serve as the eyes and ears of the SAPS (South African Police Service) within Roodeport. Due to this and of course the unwavering support of hundreds of in the area, the crime statistics are substantially lower than nearby areas.

Being a community based organisation, what makes the OPSB so successful is that the community works together to create an environment where residents and neighbours know each other and always remain informed of any suspicious activity in the area. With this is mind, Bernard Farrell, Chairperson of the Blockwatch, started using the BulkSMS Text Messenger in 2008 as a means of communicating with the neighbourhood. When asked why SMS was chosen as the primary form of communication as opposed to social media, email or USSD, Farrell stated that “with the high crime rate we needed a way of disseminating information quickly. 90% of our members have a cell phone and most understand and can read an SMS message. Not everybody has internet access and to send out a bulk e-mail is complex.” Farrell went on to explain that OPSB uses the BulkSMS Text Messenger to alert members whenever there has been criminal activity in the area. An example of this may be a call to look out for a Toyota (ABC 123 GP) with two occupants that have recently been involved in a household burglary.

Another feature of the BulkSMS platform that Farrell enjoys is that it provides the ability to personalise the SMS messages that you send. “We are a voluntary organisation and members who give of their time are valued, personalising an SMS message goes a long way in making our members feel appreciated.” says Farrell.

According to Pieter Streicher, Managing Director of BulkSMS.com, “It is great to see how SMS is being used to ensure that the Roodeport neighbourhood remains timeously informed whenever there is crime or suspicious behaviour in the area.”